At 8:00 am Saturday morning we set out for McClellanville South Carolina to partake in the 41st Annual Lowcountry Shrimp Festival and the Blessing of the Fleet.  After stopping for coffee at Dunkin Donuts we picked up Kelly and our little Kia Soul was eastward bound for the coast!  After about 2 1/2 hours of driving and rocking out to our favorite 70’s & 80’s classics on the radio we arrived at our destination.  The little town’s main street was lined with people walking with camp chairs and vendors were setting up along the road as well.  I was super happy that there was a parking field not too far off from the festivities so we didn’t have to worry about walking far.

A little insight as to what makes Jenn Kirby tick…I get a little twitchy when there are large crowds of people.  I am not sure when that happened but I have been like that for some time now.  I remember the first time we went to see the Lady Gamecocks play I had a mini panic attack due to the amount of people there and I wasn’t familiar with the arena.  Now it’s all good, being I know the layout and usually I am just following Sheila & Teresa’s lead to our seats.  I remember once we went to a Paula Deen book signing at the Book Revue in Huntington Long Island, this is before I found out she was a racist and she broke my heart, and it was frigging mobbed.  I mean wall to wall people.  We got there very early so we could get a seat and we were there for quite a while waiting for her.  I had a full on panic attack but stayed because I really wanted to see her.  Donna wanted me to go up and meet her but I was frozen in fear from the huge crowd.  This is why downtown Columbia is my kind of big city…not too big at all.  Anyway, back to the food.

So we get down to the festival, stake out our piece of earth and drop down our chairs.  Now for the food!  Kelly opted for the low country boil, Donna got fried shrimp with slaw and hushpuppies, which are her favorite and I picked a shrimp kabob.  All of it was very delicious.  The shrimp was as fresh as it could be, with a firmness to it when you bit into them.  Donna raved about the hushpuppies, claiming they were the best she’s ever had.  Even better than Rockaways!  The kabob was very good, with onions, sausage, pepper and of course big ol’ shrimp.  All of the food was great.

Then we meandered around the festival where the vendor booths were.  Kelly picked up a new travel cup for her home-brewed ice coffee and of course Donna got a lip balm.  Every where we go Donna buys lip balm.  We must have at least 40 tubes of it throughout our house!  I on the other hand found the most exquisite map.  I have been looking for a map to hang in our apartment for a while and lo and behold I had found it.  A map of Charleston Harbor which is printed on a piece of wood.  I absolutely adore this map.  The young lady who makes these was so approachable and kind, I was all too happy to purchase this from her and support her art.  Her Facebook page is http://www.facebook.com/kiracustoms, I highly recommend you check her out. 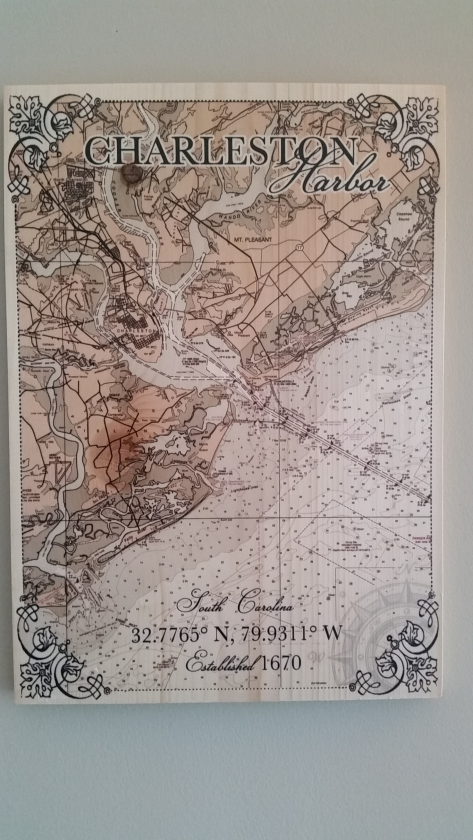 At this point it was only about 1:30 and the official Blessing of the Fleet wasn’t for another 2 1/2 hours, so we decide to blow this taco stand and head to Charleston.  Kelly had never seen the famous “Rainbow Row” in person so off we went to see the multicolored architecture on display on East Bay Street.

Life is short, eat dessert first and that is what we did.  Ben & Jerry’s was the first stop on the Charleston leg of this crawl.  Now, I know you are probably thinking…didn’t Jenn say she might be lactose intolerant in her previous blog?  Guess who makes a non dairy ice cream?  Ben & Jerry’s does!  And it actually doesn’t suck.  I had P.B. & Cookies and Coffee Caramel Fudge in a chocolate dipped waffle cone and I am happy to report that it didn’t cause me any discomfort whatsoever.  Ben & Jerry’s also sells their non-dairy ice cream by the pint in the supermarket.  After strolling the cobblestone back roads and old cemeteries that had headstones dating back as far as the 1700’s, admiring the gas lamps and side facing porches with detail filled iron railings we were ready to eat again.  We were going to eat at Hyman’s Seafood on Meeting Street but the line was way to long, a testament to how good the food is.  Bubba Gump Shrimp Co. is where we ended up.  I don’t know why we went here, maybe because it’s familiar and there was only a 15 min wait.  Maybe because my name is Jenny.  Regardless, I think this will be our last go around at good ol’ Bubba’s place.  The food was good, don’t get me wrong but overpriced and nothing over the moon.  Donna got Shrimp Cocktail and what else, hushpuppies.  Kelly and I both got burgers and we all got a cup of She Crab soup.  The hushpuppies had seafood mixed in them so Donna wasn’t too much a fan.  The Lowcountry Shrimp Festival still holds the title of “winner” for the hushpuppies.  The soup was good but not great and the shrimp were small and not firm to the bite like earlier.  Oh well, you can’t win ’em all.  After that we headed home back to the midlands.  All and all it was a day full of history, laughter, family and food.  I can’t ask for more than that.

2 thoughts on “Lowcountry here we come!!!”

This is a text widget, which allows you to add text or HTML to your sidebar. You can use them to display text, links, images, HTML, or a combination of these. Edit them in the Widget section of the Customizer.